With the smart cities project gaining momentum and making appearances in the news quite so often, there was a need to delve deeper and analyse if it is worthy of all the hype or just another case of ‘old wine in a new bottle’. We examined the break-up of ₹ 758.57 billion (11.31 billion USD) of investments proposed by the 33 selected cities so far. There we found some ‘repackaging’ of older projects but some noteworthy actions as well.

In our analysis we focused on energy, water management, transportation and waste management and found:

The ‘smartness’ element in smart cities

Though there isn’t any single definition of a smart city, it essentially refers to cities that leverage the power of ‘smart’ technology to deliver better services to citizens while bringing about more efficiency in existing services. Smart technology refers to any technology that can operate without constant human intervention or supervision to optimize the operations of existing services. For example, smart traffic management systems change the duration of traffic lights at crossings based on the real-time traffic congestion situation. Making cities smarter is ultimately linked to reducing resource use. One way to make our cities future ready is to upgrade existing systems in such a manner that reduces losses and optimizes resource use. This is where “smartness” comes into play.

Currently 33 out of the potential 100 cities have been shortlisted in 2 rounds for the Smart Cities Mission by the Government of India.

20 cities selected in the first round

13 cities selected in the fast- track round

Some of the smart technologies listed in the proposals submitted by these selected cities in our four areas of focus (energy, water, waste, transportation) include: 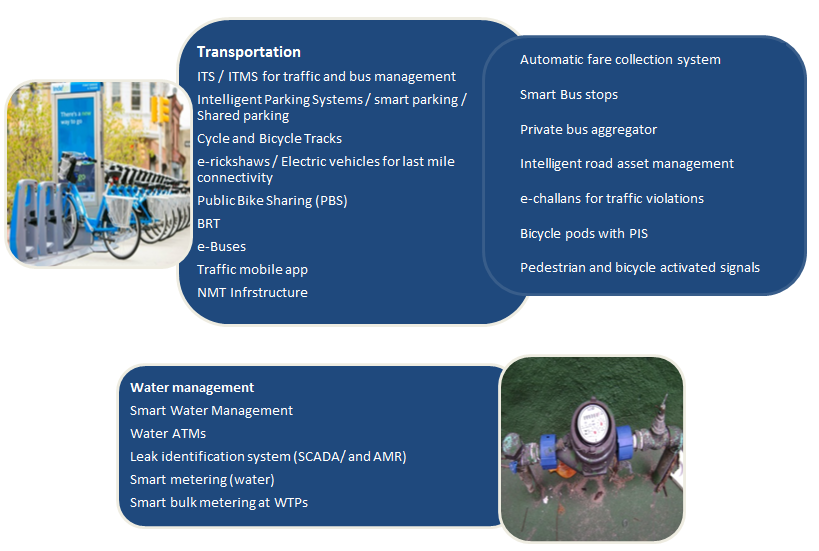 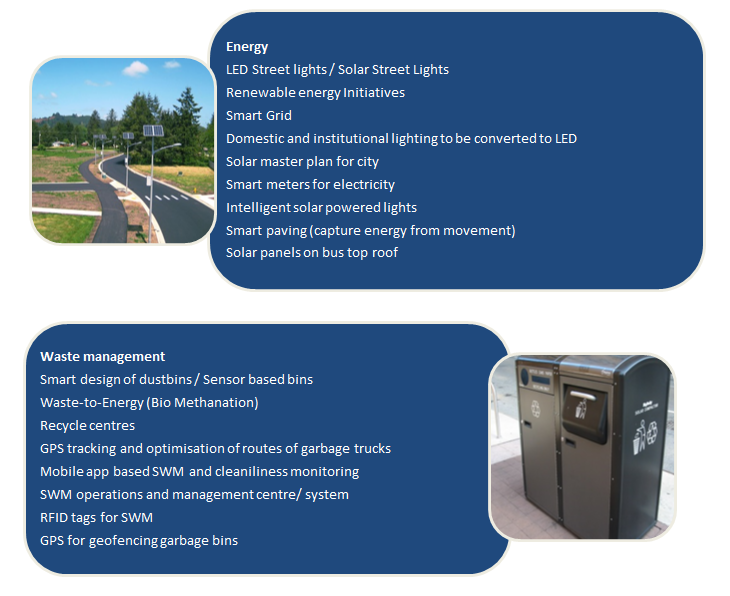 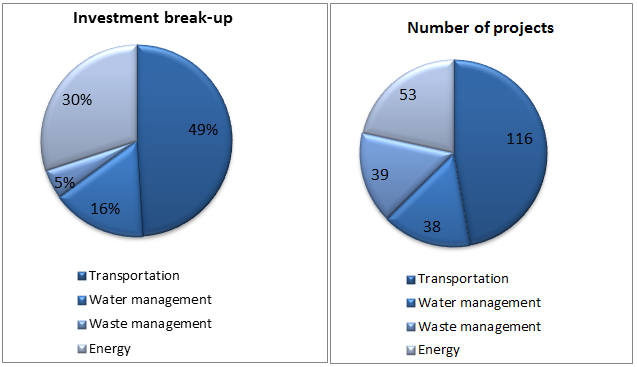 Sustainability Outlook created the Smart Cities Investment Score Card representing the investments proposed by the 33 cities for the different projects in the four domains of focus. 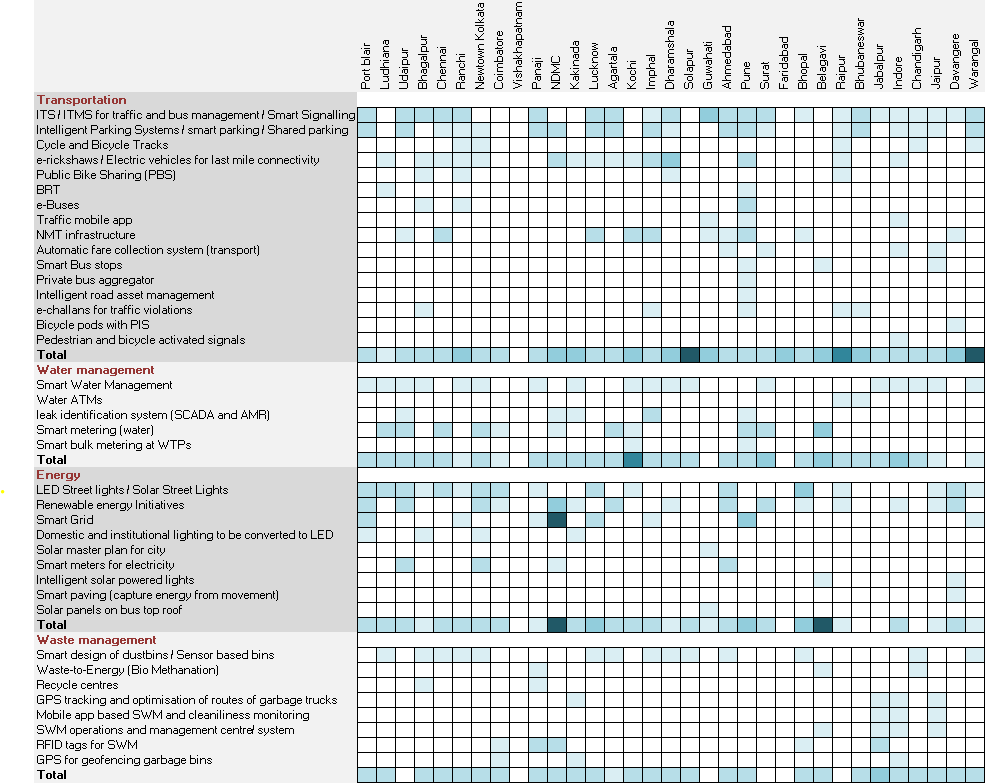 The transportation sector occupies the highest share in the number of projects proposed and well as in terms of investment in the Smart Cities Mission, followed by energy and water management, similar to the JNNURM scheme, where 80% of the investment was diverted to transportation related projects. Scanning through the projects list, it was seen that there is random distribution of projects among the cities. This just might be a good example of the principle of building resilience through diversity. Except for 16 cities proposing multilevel parking projects to be financed under the PPP mode, no patterns were formed in terms of investment. New Delhi Municipal Corporation (NDMC) is planning to invest INR 256 crores on parking sensors, while Chennai is investing INR 231 crores for Non-Motorized Transportation (NMT) alone. Warangal has proposed projects worth more than a 1000 crores in total, followed by Solapur and Raipur. Pune has proposed many distinct projects such as bus aggregators, smart bus stops and intelligent road asset management. Being a fast growing satellite city, Newtown Kolkata has proposed high investments in transportation as well as in energy. Most of the cities have proposals for some sort of intelligent parking or traffic management systems. 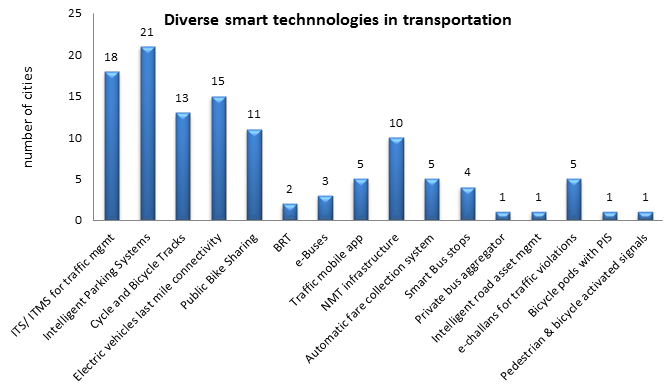 It is interesting to note that Jabalpur has diverse projects in this area, including RFID tags for bins, GPS tacking of garbage vehicles and Mobile app based SWM. The waste management project costs have been clubbed with other ICT interventions while estimating the investments. Only three cities have proposed RFID tags for bins in waste management even though the technology is simple and efficient1. Around 13 cities have proposed sensor based/ smart dustbins. Few cities have proposed bio-methanation plants, that don’t necessarily seem smart, as of yet. The maximum investment by any city has been capped at 600 crores.  Although, trailing behind, it is encouraging to see around 20 cities deploying GPS and sensor based technologies in a sector which has traditionally been neglected. Port Blair, Kochi, Pune, Bhubaneshwar and Davangere have given the aggregate investment value without explicitly mentioning the interventions. 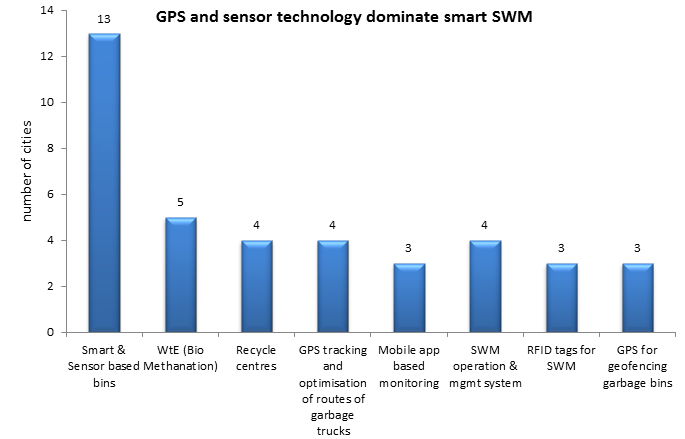 With Maharashtra, Telangana and majority of central India facing drought conditions periodically, it is increasing clear that India is a water stressed country.  Thus in order to make cities not just liveable but also resilient, water management is going to be a key area of focus. Majority of the investments in the sector have been added under the general water supply, sewerage and treatment, with smart water management proposals appearing almost in all cities. We would have to have to wait for detailed plans to ascertain the smartness and effectiveness of these interventions. With leakages in distribution being one of the major challenges faced, around five cities have added leak identification systems to their plans. These systems seem to be the smartest among the proposed interventions. Even though it is not a water stressed city, Kochi being proactive, has proposed projects of highest worth (INR 621 crores). The north east region has promising proposals, with Imphal planning to invest INR 105 crores on smart pipes and Agartala INR 290 crores on water meters. 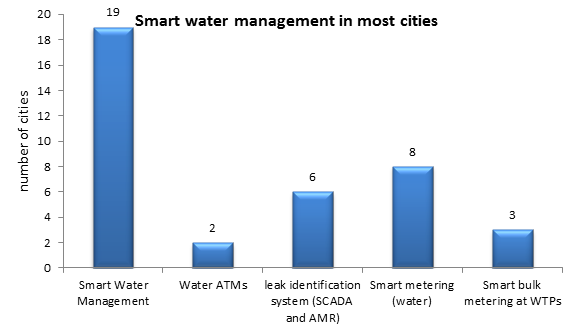 The Smart cities Mission has comparatively fewer projects in the renewable energy sector than one would have expected. This may be attributed to the fact that schemes like the Jawaharlal Nehru National Solar Mission (JNNSM) and the solar cities programme are in operation in parallel. LED Street lights / Solar Street Lights projects have a high uptake among 20 cities which will help the cities improve on their energy efficiency metrics and thus decrease the total demand of electricity for municipal areas. Smart grids also have been proposed by 7 cities with NDMC leading the way with Rs. 958 crore of proposed investment in this area.  Davangere has proposed a smart paving project in which movement sensitive panels will capture energy from the movement of pedestrians. The intervention ranks high on smartness and can be adopted by other cities in areas having high pedestrian traffic.

Except for smart grids and meters proposed by 9 cities, the smartness quotient of energy projects seemeds average. 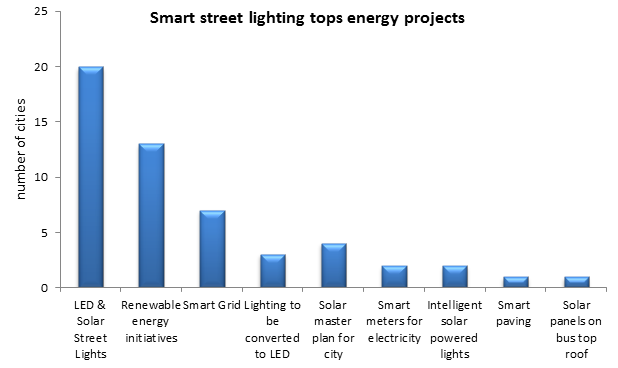 At some point while going through the smart cities proposals, one  begins to question the ‘smartness’ of some of the projects listed. Many of the selected cities have proposed generic projects like 24x7 water supply, waste water treatment and waste segregation, to name a few. Not being smart city specific, it faintly made us wonder if this is just another scheme to acquire investments under the pretext of development and divert it to other channels. The opportunity to leverage technology to make their cities stand out must not be missed. There are already huge investments taking place in urban development as stated earlier, and the smart cities project would lose its sheen if it begins to get perceived as another run-of –the-mill project. Once the plans are more detailed, some of this confusion might be cleared.

Although there is an overlap of existing infrastructure projects and a lack of ‘smartness’ in some of the projects proposed, the smart cities project is a step in the right direction to make our cities future ready and resilient. To answer the question, we began this article with, the project is not really a case of ‘old wine in a new bottle’ but a flavouful concoction of the old and the new.