This article draws from Sustainability Outlook’s conversation with the CEO of Sopogy, a Micro CSP manufacturer and takes a look at the status of Micro CSP technology and its potential in India.

While the solar industry has seen a huge surge in recent years, the uptake of technologies other than PV panels has been minimal. Despite the National Solar Mission attempting to catalyze the Concentrated Solar Power segment, the uptake has been quite limited till date. Varying reasons from lack of proven technology to size related challenges and inefficiency are typically cited by the industry players. Micro CSP is an innovative breakthrough which claims to be more efficient and much smaller than conventional CSP technology.

The idea of micro CSP is such that it utilizes the concept of large scale concentrated solar power and then shrinks it down to about a quarter the size. Micro CSP technology uses mirrors to reflect heat on a pipe carrying a heat transfer liquid. These parabolic curved mirrors commonly known as collectors are 12 feet long and weigh less than 200 pounds. It’s thus much easier to install micro CSP in, say, roof tops.

The heat generated through concentrating sunlight can be used for a variety of things- from generating hot water, to process heat or to run an absorption chiller for air conditioning. Like conventional thermal power plants, it can also be converted into saturated steam to generate electricity using turbines. Micro CSP is specifically directed towards distributed generation of 250kW – 20 MW.

The pioneer of Micro CSP technology, Sopogy, started its operations in 2002 from Hawaii and has not looked 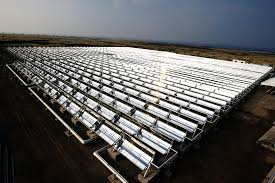 back since. Sopogy currently has projects in the USA, Europe, Middle East and Asia. Speaking about the time when their operations first started, Darren Kimura, President and CEO at Sopogy says, “The idea that I had in 2002 was to try and enable air conditioning from the sun and not from heat because I thought it would be more efficient. We started to work on our prototypes and used regular flat plate solar collectors. What we found was that in order to get a good thermal performance one had to track the sun. When you track it, it puts the sun directly overhead all the time. By doing that you produce more heat and consequently more air conditioning. Once we figured that out we decided that it wasn’t so much of a thermal technology than a concentrating technology.”

Speaking about the history of development of CSP and micro CSP, Kimura says, “Both technologies started off at the same time and were both very new concepts. About 5 years ago PV was gaining a lot of traction and CSP began falling behind but both technologies competed for power generation. Today the CSP industry is not that focused on power generation, but instead on generating steam, which is similar to what we do.”

CSP does have a lot of challenges with respect to the fact that its deployment requires a lot of land and water – a constraint that is felt in most regions. However, Kimura says, “Micro CSP is better suited to address these challenges.  I think micro CSP for industrial heat or steam is going to emerge as a huge market”.

Kimura says his customers are typically manufacturing and processing companies that use boilers and traditionally burn fossil fuels to create heat for melting metals, pharmaceutical industries and the whole range of industries which require heat for their operations.

Kimura says that Sopogy has plans of expanding to other markets in Asia including India in the near future. He says, “I have been to India 17 times and I really think the market in India is great for micro CSP – it’s a sunny market, there’s a lot of thermal energy and there is a lot of major manufacturing in India. Also, the thing with micro CSP is that you would put it in markets where you wouldn’t put regular CSP. So what I mean by that is that you hear a lot of CSP projects happening in Rajasthan, Gujarat which are great markets with plenty of sun availability. However, large scale CSP requires a lot of water. With what we do, at the micro CSP level, we can put it in Pune or Bangalore that are not as sunny but are manufacturing oriented. We would also be looking to domestically manufacture our components. We hope to expand into India very soon”

Large scale deployment of alternative solar technologies will require a push in the right direction from governments in the form of tax credits and rebates. “Policy interventions like carbon taxes will go a long way in making conventional sources of energy more expensive and paving the way for CSP to become more economical”, Kimura added.

Drawing lessons from across the world and in India, it is evident that CSP has as much of a battle to fight with coal and oil as much as it has with PV. Even though the first phase of the JNNSM had equally distributed targets of 500MW for both PV and CSP to meet its target of 1000 MW generation by 2013, PV has obviously done much better in meeting those targets with most CSP projects having been delayed and/or shelved for myriad reasons. Micro CSP seems to be a viable alternative to CSP and might find a niche consumer base in the increasingly big solar market in India. With definite advantages over conventional CSP in terms of size, water usage, scalability and the larger opportunities offered by process heat, the SME sector in India, especially, might have much to gain by Micro CSP technology.

The author, Anindita Chakraborty, is part of the Sustainability Outlook team.