The textile industry is one of the most important sectors for the Indian economy, accounting for almost 2% of the national GDP and 12% of the total manufacturing export earnings in the country. The textile wet processing sector is largely dependent on water and hence its long term viability hinges heavily on sustainable water management. The reducing per capita water availability, degrading ground and surface water quality has adversely impacted the sector and increased its vulnerability to operational risks. Furthermore, the sector uses wide variety of dyes which can potentially pollute the river streams into which the effluent flows in thus creating environmental challenges. 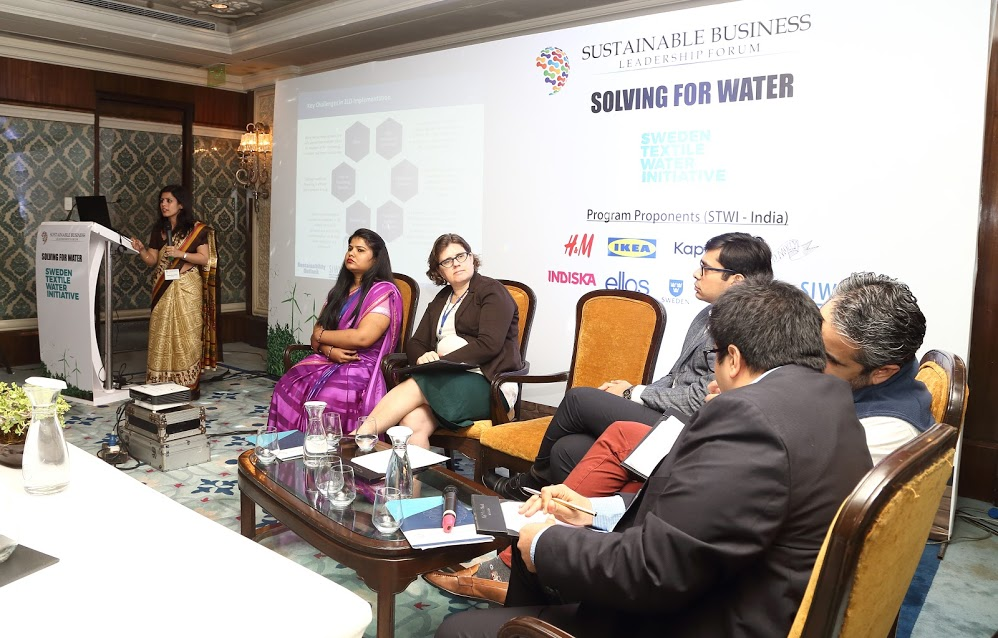 To cater to the challenges and problem of water pollution by the industry, CPCB (Central Pollution Control Board) had issued directions for nine Ganga basin states mandating implementation of Zero Liquid Discharge (ZLD) based CETP in composite textile plants and ZLD based ETPs in all textile industries. A draft national mandate was also notified in 2015, which mandated ZLD for all textile industries having effluent discharge greater than 25 KLD and CETP based ZLD facility for textile clusters irrespective of the effluent discharge quantity.(1) However, MoEFCC on 10th October 2016 released a new notification, which stated that the textile units under the MSME category are supposed to meet the discharge standard notified by the ministry, while the standalone large scale units are expected to do the same, however, those in environmentally sensitive or critical areas may also be mandated to achieve ZLD by CPCB or SPCBs / PCCs with the prior approval of CPCB (2). This latest notification also supersedes the previous notification for ZLD for the textile units in the Ganga Basin states.(3)

Zero Liquid Discharge (ZLD) requires mammoth investment and the operational cost associated is also likely to have a detrimental impact on the growth of the sector. However, with the major rivers like Ganga degrading to the level of a drain, the need to achieve ZLD by these extremely polluting textile units in environmentally sensitive zones cannot be completely ruled out.

In that context, a multi-stakeholder workshop was conducted by Sustainability Outlook in collaboration with the Stockholm International Water Institute (SIWI) under the Sweden Textile Water Initiative Project at the 6th Annual Summit of the Sustainable Business leadership Forum 2016 on 24th November 2016 to identify the risks, challenges and opportunities associated with ZLD and to ascertain concrete and feasible potential solutions and interventions (incentive instruments) to catalyze adoption of clean technologies and build capacities.

In India, the first instance of ZLD was in the city of Tirupur in Tamil Nadu, where the textile units were mandated to achieve ZLD by the Madras High Court.  In a drive to push the industry

towards sustainable wastewater management and reduction in water demand, ZLD was first mandated for the Ganga basin states followed by a draft national mandate (in October 2015) after different sectoral meetings in Haryana (Panipat and Barhi), U.P (Roomapur, Farrukhabad, Badohi, Tronica City and Mathura). In reply to the notification, CPCB received nearly 60 comments of which a mere 26 were in favour of the proposed standards.  Consequently, a national mandate was notified on 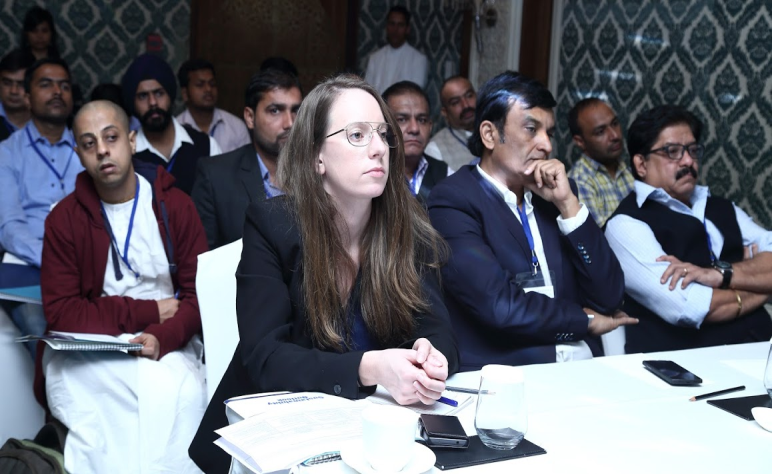 October 10th, 2016 by the Ministry of Environment, Forest and Climate Change, which stated that CPCB or SPCBs/PCCs with the approval of CPCB, may mandate ZLD in large scale units in environmentally sensitive/critical areas while the textile units in MSME (as per the MSME Development Act, 2006) category have to meet only the new discharge standards laid down by the notification. In addition to this, the new notification also clubbed all integrated textile units, units of cotton/ woolen/ carpets/ polyester, units having printing/ dyeing/ bleaching process or manufacturing and garment units; making the discharge standards uniform throughout the industry.

Ms. Reena Satavan, Scientist from CPCB stressed on the fact that the new notification was in response to the concerns raised by the industry regarding the unfeasibility of blanket ZLD due to the enormous amount of investment in terms of capital to build the infrastructure and the operational expenditure that would be required. She highlighted that the costs incurred to achieve ZLD would be in tunes of INR 15-18 crores/MLD (excluding the cost of land and captive power plant). Moreover, a one MLD plant would generate as much as 6-7 Tonnes of mixed salts, of which about 4-5 Tonnes can be recovered but the challenge of disposing of the remaining amount would still persist.

Bringing forth the perspective of a large scale textile group, Mr. Abhishek Bansal, Chief Manager – Sustainability, Arvind Limited stated, “Although cost-effective technologies are available for ZLD and are in operation now, but initial investment and lack of technical skills are major challenges for ZLD implementation.” He highlighted that, though there are certain pressing issues related to ZLD such as lack of space, high implementation cost, by-product disposal after evaporation, escalated carbon footprint, lack of understanding of appropriate technology and lack of financing sources, yet it is achievable. He shared Arvind’s experience of successfully operating the largest ZLD plant in Asia treating 18MLD of water; using sewage treated water in process as a replacement of groundwater and use of recycled water as process water in its denim laundry facility.

Mr. Abhishek Bansal’s view was echoed by Mr. Sumeet Nath from Raj Overseas too. He stated that the only way forward is to adopt and accept change. 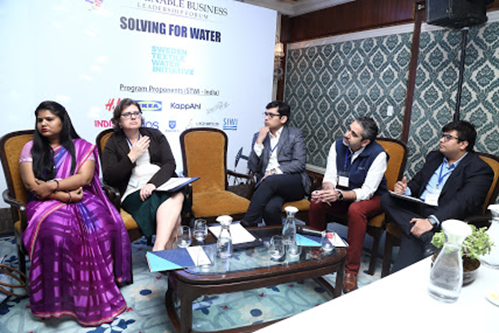 He said, “Government needs to develop policies to encourage cleaner technology in manufacturing units; provide financial assistance or subsidies to industry to adopt the newer technologies; provide tax relaxation to industry; and organize workshops and seminars to generate awareness about new technologies before its implementation.”

The panel discussion successfully brought to table the perspective of the various stakeholders highlighting the challenges and risks. A focused group discussion was also conducted to discuss innovative approaches and possible solutions to address the challenges associated with ZLD in the textile industry and hence catalyze adoption of cleaner technologies.

Carrot and Stick Approach needed for ZLD Implementation in India

The focused group discussion attempted to address three major questions which would help bridge the implementation gap and accelerate adoption of cleaner technologies. The key areas of discussion were:

scarcity at the source itself. It was also highlighted that there is a need to financially incentivize uptake of more sustainable techniques like waiving off the cess for units using partially or untreated wastewater for the amount of make-up water being consumed in excess of the benchmark. Moreover, a carrot and stick approach needs to be introduced as per the benchmarks to ensure better compliance.

It was also pointed out that the pollution control board in the country was also set up to disseminate information related to technology. There are some documents that are available known as COIND, i.e. Comprehensive Industrial Document, but these are rather old and hence need to be revised. Moreover, it was also suggested that the technologies should be tried on pilot basis so as to work out the statistics and come out with a detailed report on its basis to help standardize and ease the uptake of clean and efficient technologies. 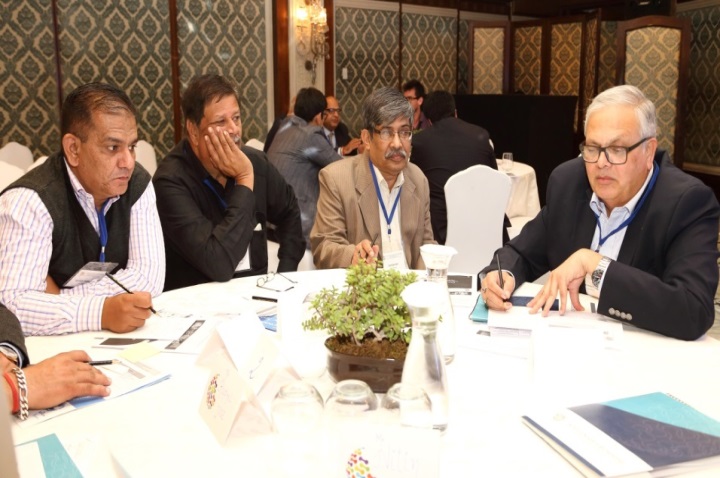 Comparison between common treatment facilities and individual ZLD facilities was made based on the criteria of accountability, effluent characteristics, financial aspects and longevity. It was concluded that due to greater accountability and much more stable and better monitored effluent characteristics in case of individual facilities, the concept of individual ZLD makes more sense as this also increases the longevity of the system. In terms of the expenditure involved, though the burden on the units is reduced in case of a common treatment facility but it is achievable in both the scenarios. Moreover, setting up the two-way pipelines to send the effluent to the common facility and taking back the recycled water in itself is a huge hassle and hence individual ZLD is a preferred option.