The cost implications of BS IV to BS VI transition

The Bharat Stage (BS) emissions norms are India’s foremost emission standards for the auto industry. India adapted the first set of these norms for petrol cars in 1991and for diesel cars in 1992. Since then, the Indian auto sector has been mandated to follow various iterations of Bharat Stage emission norms or BS norms since 2000. These have been implemented with the intention to regulate emissions by improving technology and fuel grade in ICE vehicles.

Currently Indian cars are compliant to BS IV norms but in 2016, the government mandated the industry to leapfrog from BS IV to BS VI making the ambitious decision to skip BS V. This means that BS IV vehicles cannot be sold on or after April 1st 2020. This transition will require the automotive sector to make investments in order to be BS VI compliant. This article will look at the key changes BS VI is set to bring as well as cost implications of those changes.

Bharat Stage norms have reshaped the auto sector in India

The auto sector in India is scrutinized for being one of the main sources of air pollution. Despite India being the fourth largest auto industry in the world, it was relatively slow to adapt emission standards when compared to Europe and USA. However, BS norms have reshaped the automotive sector by pushing manufacturers towards using cleaner fuels and efficient technologies. In India, the transport sector is responsible for one-third of particulate matter pollution, which is the main cause of health and respiratory diseases especially in urban areas. This was one of the reasons for rapid rollout of BS norms both city-wide (BS norms were first implemented in 13 cities) and subsequently nationwide.

The first version of these emission standards were implemented in 2000. This was followed by BS II and BS III which were implemented nationwide in 2005 and 2010 respectively. Bharat Stage VI is set to be implemented on 1st April 2020. The key air pollutants targeted under these norms are nitrogen oxide (NOx), carbon monoxide (CO), hydro carbons (HC) and particulate matter (PM).

Table 1: Shows the emission limits for pollutants from BS III to BS VI

The iterations of BS norms consist of primarily three areas: technological upgradation, better fuel grade and stricter testing requirements. Overtime, emission norms have helped manufacturers phase out lead content in fuels. Amongst other requirements, BS VI norms have also introduced particle number (PN) limit of 6.0*1011/kWh and a further tightening of particulate Matter (PM) limit from 25 mg/km to 4.5 mg/km.  BS VI has been touted to be one of the most challenging yet for the automotive sector. The impending transition from BS IV norms to BS VI is expected to bring about newest automotive technology in Indian cars as well as setting a new benchmark for future emission standards. Below are some of the key changes from BS IV to BS VI: 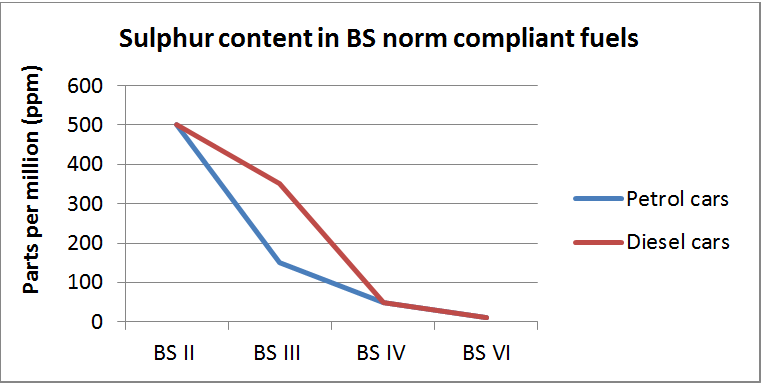 Emissions standards have helped ensure there is regular upgradation of technology and fuel refinement in order to phase out hazardous pollutants. This also means that manufactures have invested in research and development and internal testing of BS VI compliant tech like the particulate filters and OBD to make sure vehicles are saleable after 1st April 2020. Since these technologies are relatively nascent, OEMs have to make steep investments. In October, Union Environment minister reported that about INR 600 billion has already been invested in shifting to BS VI. These costs will likely trickle down to buyers as OEMs are expected to compensate these costs in the future. The rising fuel and vehicle price is likely to contribute to the current bearish automotive market.

So far BS VI fuels have been rolled out in Delhi, parts of Agra, Rajasthan and UP, although it has not seen much of an uptake as of yet. Fuel suppliers across India are in the process of making sure that BS VI grade fuel is available country wide prior to the deadline of 1st April 2020, although there is no certainty of timely availability as of yet. The advance roll out of BS VI fuel is encouraged to control sudden price movements as well as ensure a smooth transition for BS VI eligible vehicles.

BS VI is a tradeoff between cost and the environment

Leapfrogging from BS IV to BS VI comes at a key juncture as India is faces high levels of air pollution, particularly in its cities. However, stakeholders in the automotive supply chain are weary because of the low demand in domestic sales. The expected transition to BS VI norms may contribute to the ongoing slowdown in the market, partly because consumers may not want to invest in BS VI at this time. However, the environmental benefits BS VI norms are set to bring about may be hard to ignore. Data shows that low-sulphur fuels are expected to decrease PM emissions by 80% from diesel cars and 25% less nitrogen oxide from petrol cars.

India’s attempt to transform the auto sector through emission standards comes at a critical juncture as India’s pollution problem shows no signs of slowing down. Urban cities like Delhi have seen hazardous levels of pollution which has pushed the government to take onus to reduce emissions in hopes of improving air quality.