This article was originally published on Firstpost and has been reproduced here with due permission from the author and the website.

Why does anyone manage any resource poorly?

One answer is that they think it is not a scarce resource. The other is that one believes they can get away with it — i.e., there will be no consequence — either positive for good performance or negative for bad performance.

Take water for instance. There is a hue and cry today because the uncertainty of availability pinches the bottom line or takes away more sleep than you had bargained for. But thus far, as long as ground water aquifers kept feeding the borewells, most of us were okay with the bargain, Recall: Chennai is overdrawing its ground water 1.85 times! This false sense of plenty — because we cannot perceive just how much water there is underground — is one possible reason why we have managed our water so poorly. If that is indeed the case, going forward, as groundwater runs scarce, we might manage water better.

But the second possible explanation for poor management is the lack of a good incentive mechanism, either for our politicians or our bureaucracy. Let us see why by taking one very visible sign of mismanagement: encroachment.

If we had wanted to engineer a crisis, we could not have done a better job. Deficiencies in public infrastructure make India’s cities smaller than they should be, meaning urban water bodies are very attractive as land parcels. As a city grows, new neighbourhoods on the peripheries often lean into water bodies and do not have municipal water connections. That takes time. What the residents in these new neighbourhoods usually do is to sink a borewell, and begin to draw water from below the ground. You turn on the motor, and your sump fills. You cannot see the water, and after years of reliable use, you think it permanent, and therefore do not need to pressure the corporation for a commission. Your builder might have leaned on a water body and built where he was strictly not supposed to. It might even be awkward to ask for a water connection. After all, there is so much water available underground. Until one day, it runs out, and your life turns upside down. A 2017 CAG report says that of some 1,554 water bodies in Chennai, less than a third were surveyed. In those, 36,814 encroachments were identified, of which 10,764 encroachments were evicted — resulting in a pitiful 170 water bodies being restored to their original capacity. Importantly, no encroachments were cleared in 2014-15, or 15-16, the last two years covered in the report. Some of the encroachment, states the CAG report, are by local bodies themselves, often for disposal of solid waste or for accommodating slum dwellers evicted from some other part of the city.

The report goes on to say:

“To an audit enquiry, the executive officer, Peerkankaranai Town Panchayat, replied that as occupants of all illegal colonies inside water bodies in the Town Panchayat were issued with Patta by Revenue Authorities, taxes were collected and basic amenities like roads, streetlights and water supply were provided.”

Encroachers, rather than being evicted, were being encouraged!

Clearing encroachments has no obvious upside for the person(s) doing the clearing. The evictees will protest, go to court, stall the proceedings, take away time you don’t have on court attendance, lobby powerful interests, make your life hell. It’s unlikely that you will get either more money, or more power by evicting them. Leave them be… After all, everyone is doing it.

And when everyone does it, it doesn’t seem quite so wrong.

Take the example of Pallikaranai. Wetlands are literally the kidneys of a landscape as they filter contaminants and soak up water and replenish groundwater aquifers. Pallikaranai is the main wetland of Chennai. Back in 2003, the chief economist of one of India’s largest real estate consultancy firms declared Pallikaranai to be a prime investment destination, where “prices could double in nearly five to five-and-a-half years’ time”.

Developers and investors were quick to jump on what seemed a ‘too-good-to-miss’ opportunity, and the wetland was slowly eaten away (See Figure 2 below). The icing on this unpalatable cake is that there is an enormous landfill cited on Pallikaranai. That’s really like a toxin-loaded syringe released into the filtered blood supply coming out of your kidneys. This has been going on for decades. The advertisements for these developments have been proudly and flamboyantly carried in the same newspapers where opinion columns bemoan the water crisis today. Thousands bought flats and take jobs in the developments that have come up on the feed plains of these wetlands. It’s been one heck of a team effort — which means it requires a team effort to reverse.

A Problem of Data

Of course, the state of data doesn’t help.

For instance, in what is definitely a critical juncture in Chennai’s water story, it is unbelievable that we do not have a firm handle on just how much water we are using. Second, when looking at the level of metering, estimates range from 20 percent of water consumed being measured, primarily of bulk customers, to over 60 percent. Even the share of different supply sources is not too certain. When large scale protests have not broken out at a time that a city’s main reservoirs are empty, it shows quite clearly that there are other sources coming into play. Experts opine that the level of metering is far lower, and understanding where demand is coming from is a big problem.

To give you a contrast, in my factory, we have a hundred water meters to understand precisely where, when and how we use water. This allows us to reduce demand in a cost-effective fashion. Moreover, when the data is so uncertain, it reduces the motivation to act. To give a medical analogy: contrast your doctor saying, “You will die in six months if you don’t stop smoking” to one doctor saying, “I’m not sure, maybe you will live for 20 years even if you smoke,” while another says, “You could live for five years or two months, I’m not sure”. Very different calls to action.

The Hit to Supply

The problem is that encroachment reduces water supply.

For instance, Chennai gets only a miniscule fraction of the 15 TMC it is due from the Krishna waters, at least in part due to encroachment and illegal tapping.

Next, consider this set of images over two decades of the Porur Tank. The image top left is from 2000, courtesy Google Earth. The one on the bottom left is taken in 2010 — you can see how the city has begun eating away at the greenery surrounding the lake. Many Indian cities have a system of cascading tanks, where the surplus from one, flows downstream. Encroachments cutting connecting channels reduces the effectiveness of the entire system. Moreover, by replacing green with concrete we hit percolation — i.e., the flow of rainwater into the ground, rather than into a stream and thence to the sea. Lastly, local land use change — especially cutting forests — has shown to impact local rainfall. Studies put the contribution of forests to terrestrial rainfall (rain over land) at 40 percent. That’s huge. Encroachments also hurt flood resilience — the rivers and the tanks help suck in some of the excess. Chennaiites are crying because there is no water now. Come November/December, they will be cringing because there is too much.

India, with a peculiarly seasonal water supply, cannot afford to continue to decimate her storage mechanisms.

Let’s Not Forget the Climate

Now, add climate change. It has become somewhat fashionable to load all woes on climate change. It’s useful too — it absolves us from even taking the mental responsibility for a problem. In this case, there are, in my mind, two ways by which climate change does exacerbate this crisis. First, when it gets hotter, and the incidence of heatwaves rises, one needs more water to cool down. Thus, demand rises. Also, the fraction of water that evaporates goes up, reducing supply. Second, the number of rain days comes down as the planet warms — this means the fraction of rainfall that “runs off” increases, especially when we reduce the amount of space that can soak up the run off. This cuts supply, and makes us flood-prone (something Mumbai residents can empathise with just now).

In financial terms, global warming upsets both our water balance sheet and income statement, increasing our vulnerability. Perhaps that’s a good thing — we may just need this kind of warning to clean up the system. 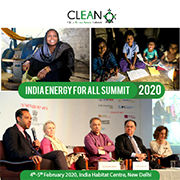