The recent acquisition of CaliforniaCarbon.Info by cKinetics has broadened the company’s foray into carbon markets through climate analytics. Using this expanded knowledge base, this article explores how learnings from California’s cap-and-trade program can be adapted in the Indian context through the PAT scheme.

California’s cap-and-trade program is one of the most effective carbon trading schemes worldwide. Its success is evidenced by decline in emissions along with an increase in economic growth within the state. Part of what has made this program a success is the breadth and depth of its coverage, transparency and steep penalty for non-compliance. While India has also framed and undertaken similar programs such as PAT scheme, there are regulatory limitations that can be addressed in order to scale up and strengthen this market further. This article will discuss learnings from the cap-and-trade program and identify gaps in the PAT scheme where these learnings can be implemented.

Under Assembly Bill 32, it is mandated that GHG emissions in California should be at 1990 levels by 2020, 40% below 1990 levels by 2030 and 80% below 1990 levels by 2050. The cap-and-trade program which started in 2013 became the state’s flagship program in order to meet those targets. There are two main components of the program; first is ‘cap’ which puts a limit on the total GHG emissions participants are allowed to emit annually. Second is the trade which allows entities to buy and sell California Carbon Allowances (CCAs) [1 CCA = 1 ton of CO2e]. Entities that pollute more buy more CCAs to meet their compliance obligation from those who have surplus after meeting their targets. This is what provides economic incentive for entities to pollute less especially as the price floor of CCAs is mandated to increase by 5% plus inflation on an annual basis. In 2014, the cap-and-trade program linked with Quebec creating a common market place for entities in both jurisdictions to trade allowances with each other.

Success of the cap-and-trade in California

The success of the cap-and-trade scheme can be attributed to the wide emission and sectoral coverage under the program. The cap-and-trade program covers 9 emission-intensive sectors, the biggest being the transportation fuels & CO2 suppliers followed by natural gas suppliers. The cap-and-trade program covers around 85% of emissions making it one of the most comprehensive emissions trading program globally.  According to Californiacarbon.Info analysis, since 2013, California has experienced 26.05 MMTCO2e (Million metric tons of carbon dioxide equivalent) of emissions reductions (Ref. Fig 1). 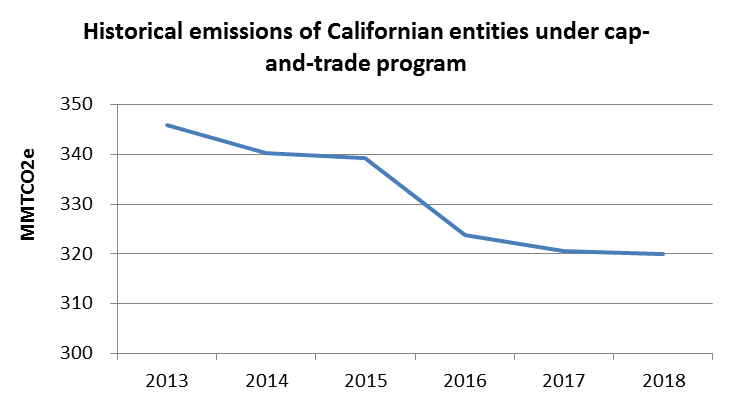 Figure 1 Annual emissions of all entities under the cap-and-trade program. Source: CaliforniaCarbon.Info 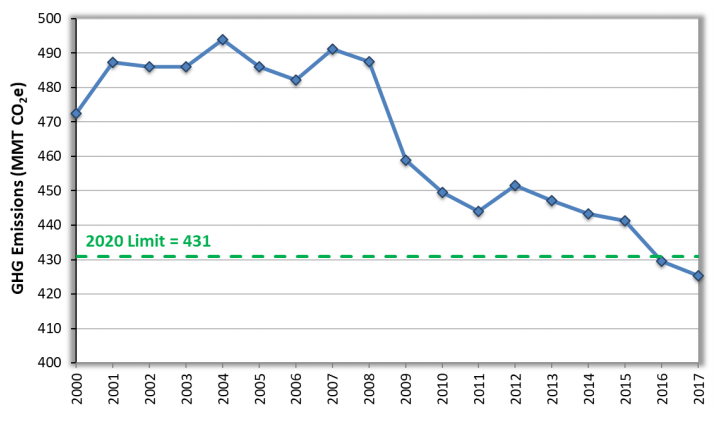 Mechanisms under the cap-and-trade make it complex but effective

Entities who participate in the cap-and-trade program are subject to a set of mechanisms which provide a means to meet their compliance obligations. They are two primary ways in which the California Air Resources Board (CARB) disburses allowances – free annual allocation and quarterly auctions. Depending on the sector, ARB allocates free allowances that cover a significant portion of emissions, especially from high energy intensive sectors. If those entities need to procure additional allowances they participate in the quarterly allowances. Cap-and-trade is a flexible mechanism as it allows entities to meet up to 8% their compliance obligations through California Carbon Offsets (CCOs) credits. CCOs are generated after a thorough verification process to ensure that offset projects are viable. Another feature of the program is ‘bankability’ of allowances. Entities who want to sell excess allowances can ‘bank’ their allowances in their holding accounts and can sell them in the secondary market.

What California does right

With the cap-and-trade program, the ARB aims to strike a balance between enabling economic growth and emissions reductions. From 2004 to 2018, California’s economy has grown 26% coupled with a 13% reduction in emissions over the same time period. The ARB has included features in the program that encourage this balance. The free allocation of allowances is put in place to avoid ‘leakage’. Distributing free allowances helps California-based entities stay within the jurisdiction, avoiding potential migration to other states where they do not have to comply with an Emissions Trading System (ETS). Additionally, the regulation on mandatory reporting of GHG emissions by entities allows ARB to monitor annual GHG emissions. If an entity is not transparent in its disclosure with regards to its emissions data, or there is collusion in bidding strategy and in cases of non-compliance, they incur a hefty penalty depending on the offence. ARB not only imposes these penalties but also discloses the penalty charged to retain transparency.

As the conversation surrounding article 6 still lingers post COP 25, countries are still in the process of negotiating a fitting carbon trading program that can address the scale and volume of a potential market mechanism. India’s Climate Action Tracker states, “The Government is in the process of implementing carbon pricing mechanisms to encourage energy efficiency in industry. A pilot system for small to medium enterprises is expected soon, and 37 companies are in the process of adopting an internal carbon price, with leaders including major cement producer Dalmia Bharat Cement Ltd.”

The question is – how India can implement such a complex and transparent program like cap-and-trade. Last year, the Energy Policy Institute of Chicago (EPIC) ran a pilot cap-and-trade in Surat which is the world’s first particulate matter ETS. The pilot program was found to reduce particulate emissions by 29%. Aside from the aforementioned pilot program, India has more established trading schemes like the ongoing PAT scheme. The following section explains PAT and examines its current performance.

The Perform, Achieve and Trade (PAT) scheme was formed to facilitate the National Mission on Enhanced Energy Efficiency (NMEEE). The aim of PAT is to reduce energy consumption amongst India’s most energy intensive sectors. Entities who participate in PAT (also referred to as Designated Consumers or DCs) are provided with a sector specific targets (i.e. textile sector has a different target than the aluminum sector). DCs have to implement means of reducing energy consumption (which comes under the perform aspect of PAT). Those that have achieved their targets in reducing energy consumption are awarded with ESCerts (1 ESCert = 1 metric Ton of Oil Equivalent (mtoe)) based on their MTOe reductions. These certificates are eligible to trade on India Energy Exchange (IEX). Those that have not managed to stay in line with their targets buy ESCerts from DCs who have outperformed their targets in order to comply with the scheme. This mimics the salient features of cap-and-trade program. With each PAT cycle comes renewed (more stringent) targets with newer DCs who are qualified to participate in this program. This provides a financial incentive for sectors to keep reducing their energy consumption.

This program has the potential to scale up by pushing industries to conserve more energy and be more energy efficient. The key limitation of this scheme so far has been the lack of enforcement of penalty in cases of non-compliance. Additionally, while the PAT scheme has seen some success, towards the end of PAT cycle I prices of ESCerts had decline 167% over one cycle. Since ESCerts do not have any price controls in place, prices can fluctuate. More so, since excess certificates awarded in cycle I can be used in targets in subsequent PAT cycles. This can skew the supply and demand and thereby cost, especially if the targets are not adequately stringent.

Recommendations and learnings from cap-and-trade

Importance of including the true price of carbon

According to World Bank’s report titled ‘State and Trends of Carbon Pricing 2019’ 96 countries including India has committed to using carbon pricing to meet NDCs. India is yet to see a national level carbon market,  however PAT scheme can be a start. In the same report, the World Bank states that in order for achieve the Paris agreement the price of carbon should be around US$40tCO2 to US$80/tCO2 by 2020 and US$50/tCO2 to US$100/tCO2by 2030. Neither California’s nor India’s program reflect these levels making them significantly less stringent than they currently need to be.

The cap-and-trade market has been successful because of transparency and enforcement. It has also proved itself to be malleable to sudden changes in the market e.g. when Ontario delinked from the program, ARB declared credits from that jurisdiction to be invalid, a policy that was formulated overnight to protect remaining participants of the program. If these gaps are addressed in the Indian market then the PAT scheme can become more robust and well-balanced whilst achieving bolder targets in the coming years.